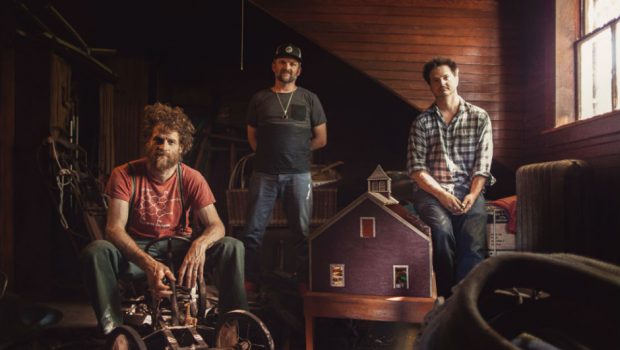 The band known as Dispatch formed in 1996 as its members — Chad Urmston, Pete Heimbold and Brad Corrigan — attended Middlebury College. Less than a decade later, Dispatch had played to 110,000 fans at a 2004 concert in Boston. Just a few years after that in 2007, Dispatch had sold out three shows at Madison Square Garden, all of which fundraisers for Zimbabwean humanitarian efforts. Similar success would occur when Dispatch announced 2015 benefit shows at the Garden, under the DISPATCH:HUNGER banner. Unsurprisingly, every ticketed show on Dispatch’s upcoming tour — in support of America, Location 12, the trio’s first full-length since 2012 — is already sold out; the tour starts with a free show at Killington, Vermont’s Killington Resort on November 25th.

On behalf of The Hype Magazine, I had the pleasure doing Q&A with Brad Corrigan. Besides his Dispatch responsibilities, Corrigan maintains a solo career — releasing music through his own label Third Surfer Music — and is the founder of the non-profit Love Light & Melody. More on Corrigan and his Dispatch bandmates can be read online at www.dispatchmusic.com.

Dispatch has probably been the only band to perform a real concert at Red Bull Arena in Harrison, New Jersey. I remember reading that the band ziplined into the arena for that show. Where did that idea come from?

Brad Corrigan: When we realized we were going to be playing a place Red Bull was behind, we jokingly asked if we could get shot out of cannons, or skydive into the arena. Then they offered us — without joking — their daredevil helicopter to do flips and fly us into the place, which made our stomachs turn. So we came up w the ziplining plan instead. (laughs)

Very early into Dispatch’s success the band headlined Madison Square Garden. To a lot of bands headlining MSG is their career-defining accomplishment. Was that the case for you?

Brad Corrigan: Not really career-defining, not sure if a venue could ever carry that weight for us, but definitely one of our favorite experiences as a band!

Is there a goal that you’re still working towards as a musician?

America, Location 12 is the latest album from Dispatch. How long did you spend writing it?

Will you be playing a lot from America, Location 12 on your upcoming tour dates?

Brad Corrigan: Yes, we have eight new songs in rotation with our live shows!

Do you have any music or work-related projects going on at the moment beyond Dispatch?

Brad Corrigan: My NGO, Lovelightandmelody.org, has been working on producing a documentary film, Ileana’s Smile, for the last four years. Next year, the film will be released along with a book I wrote and a collaborative benefit soundtrack to raise money so we can build a school for the trash dump kids in Nicaragua that the film is about.

You three have been the only members of Dispatch, as far as I know. Any strategies as to how you guys stay in each other’s good graces? I can’t picture the members of Dispatch going through band therapy a la Metallica or Bon Jovi…

Brad Corrigan: Oh, we’ve had plenty of breaks from each other, and plenty of therapy too. (laughs)

When you’re not busy with music, how do you like to spend your free time?

Brad Corrigan: Outside soaking in the wilds, surfing, spearfishing…

Do you have a favorite restaurant in New York City?

Brad Corrigan: Ah, flip I can’t remember the name of it, but it’s an amazing Thai restaurant on the Upper West Side…

Finally, Brad, any last words for the kids?

Brad Corrigan: One, give yourselves to building relationships and community, as it’s the only way forward. Two, find your passion, follow the way of love, breathe peace, laugh a lot, and give yourself away…