Isaiah Dreads – Back to the Future

UK grime and hip hop artist Isaiah Dreads drops his new eagerly anticipated mixtape, Back to the Future via Payday Records, entirely produced by Zdot (who most notably works with Bugzy Malone and Stormzy). Having revealed his downtempo track “Chill” laced with his wittily lyricised bars, across a deep and brooding melody just last month from the new mixtape, the project comes on the heels of recent singles “Up Now,”  followed by the music video which was released on GRM Daily, as well as “Real Friends,” with DJ Target describing the latter as Isaiah’s “best record yet” on his 1Xtra show. An anthem to success, Back to the Future highlights Isaiah Dreads raw talent, intelligent lyricism, and ability to stand out. The lead track “Who’s That Girl feat. Micah Million” whose vocals complement Dreads flow perfectly, shows off a tropical vibe with a reggaeton inspired beat and a sexy baseline that makes you want to dance. “Buzz Like Andy,” is a short ode to accomplishment featuring fast flow, heavy bass, and an eerie choral sample in the background, with lyrics like “yeah I went from a boy to a man, to the man and I got buzz like Andy” – supporting a theme that prevails throughout the whole project. Following this track, Dreads goes in on “Do the Most,” with a heavy bassline that almost makes your head buzz, a steep build up with a tenacious drop, and lyrics that praise his hard-working habits. “Ironic” functions as a general diss-track, calling out how every rapper’s flow sounds the same, but when Dreads mimics them, he does it better. The sound on this track contrasts the others with a bouncy choral sound, classic trap beat, and a catchy hook.

Released last month, “Chill” is a swingy ode to Dreads unique style. Foreshadowing the mixtape, he praises his individual vibe claiming “I’m post-modern / futuristic,” and “I’ll be in my room watching Back to the Future,” indicating the formation of his next project that would come to be this mixtape. To keep momentum, Dreads then delivers an upbeat, brighter party anthem “Blame it on the Rum.” The track has a sensual sound with deep base, pop style, and party potential, with fun lyrics such as “if anything goes wrong, blame it on the rum” – a surefire jam for a night out.

“Tell Em Again feat. Yizzy” and “Patience” bring the listener back to Dreads initial quest back to the future, to his success and achievements. “Tell Em Again” is aggressive, deep-cutting, and high energy, expressing lyrics such as “I ain’t a kid no more / I’m dangerous when I’m in the zone / now I gotta tell them again,” Dreads is claiming his space, making us all aware that he is on his grind and cannot be stopped. His vocals are contrasted from his quick smooth flow to Yizzy’s gritty timbre, creating a catchy balance that rounds out the song. Following the vibe of the previous track, “Patience” begins with a spacious, eerie intro, that builds up to an intriguing classic trap beat, and an intense hook with deep cutting drums that capture the listener and consume the ear, back out to the high energy beat.

To round out the mixtape, Dreads delivers “Up Now” and “Me and You,” two tracks that leave the listener on a positive note. “Up Now” provides a true contrast to his other darker tracks, with poppy xylophones and Latin inspired drums. His lyrics, “I’m up now, yeah I’m lookin up now / I was in the ground / now I’m on the rise”, are a true representation of how far the rapper has come since debuting in 2014, and a positive admonition that the young artist is still working, continuing to rise in the industry. Finally, to keep the high note, Dreads ends the mixtape with “Me and You”, an upbeat love song that starts out with an acoustic intro that dives into the satisfying and full sound of the track. The lyrics paint a picture of young love, running around “just me and you”, claiming “I would never take you for a fool, you know I wouldn’t”. Dressed in an island-inspired sound, classic keys, and catchy hi-hats, it is the perfect wrap up to a powerful mixtape layered in clever lyrics, delicious flow, and an overall uplifting message. Dreads take his listeners back to the future, the future of his rise on the music scene and overall takeover.

“Back To The Future is a project I’m really proud of,” said Dreads. “There’s a mix of sounds which I had a lot fun with, plus it’s inspired by my favorite movie. I can’t wait for everyone to hear it”

Back To The Future Mixtape Tracklist: 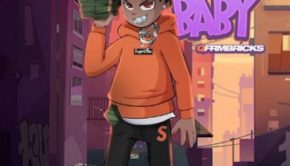