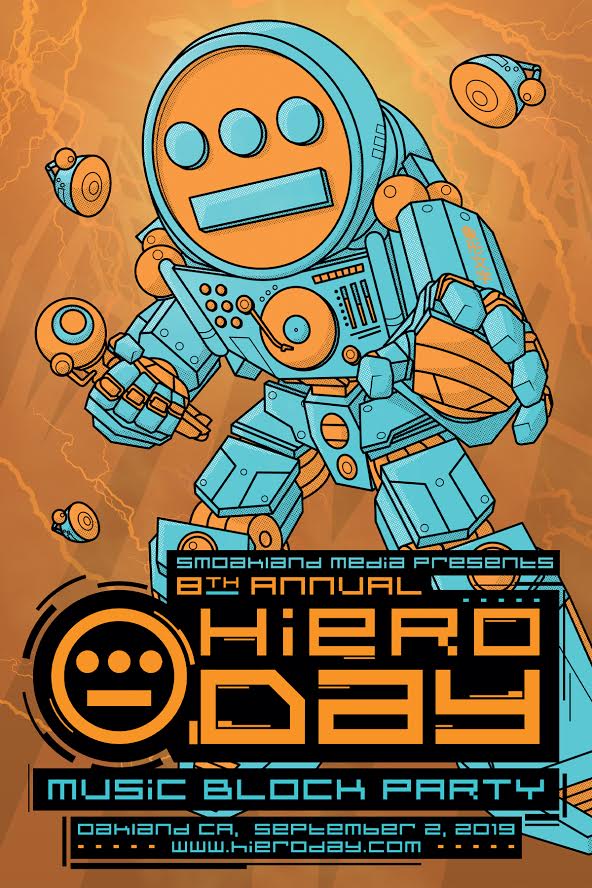 Oakland, CA – The Hieroglyphics Crew is back for its 8th annual Hiero Day celebration this Labor Day (9/2) in Oakland, California. The Hiero Day Music Block Party, presented by Smoakland Media is an all-day, all-ages music event showcasing over 30 live performances on 3 stages by the best legendary, underground and undiscovered artists in genres such as hip-hop, R&B, and more.

Oakland-based hip-hop collective, Hieroglyphics Imperium, has presented Hiero Day since its inception, using their influential force in the independent music scene to attract star-studded lineups. Past Hiero Day stages have featured such musical legends as Grammy award winning artist Anderson Paak and three time Grammy award winner Black Thought from the Roots crew. The event has seen west coast icons Too Short, DJ Quik, The Pharcyde, Yo Yo and Lil B “The BasedGod,” perform. Southern pioneers Bun B, Juvenile and Mannie Fresh have shared stages with East Coast mavens like Dead Prez, Just Blaze and Talib Kweli. Each year, the 10,000+ Hiero Day attendees have become accustomed to seeing both the best global talent at Hiero Day and phenomenal up-and-coming talent like Kehlani, Caleborate, Sa- Roc and Los Rakas, who are on the cusp of stardom.

This year’s line-up continues to offer a diverse array of talent as we welcome hip-hop icons Little Brother, Scarface, Diamond D, Pete Rock & Yukmouth, Black Moon, Smif N Wessun and Spice 1along with heavy hitters Benny the Butcher & Conway the Machine (fresh of their recent signing to Roc Nation and Eminem’s Shady Records,) Playrunners Association, The Midnight Hour(fronted by celebrated composer Adrian Younge & A Tribe Called Quest’s Ali Shaheed Muhammad) and the Earthgang/Spillage Village affiliated songstress Mereba. The day will be hosted by a variety of local legends including Mistah F.A.B., Chuy Gomez and Sway Calloway and features a performance from the Hieroglyphics crew, fresh off of their Third Eye Vision Anniversary tour.

Director of the event, Veronica Webber, explained what’s new at this year’s Hiero Day. “This year we are introducing “Hiero Day Weekend”, a series of events we have talked about for years,” she said. “We have such a great fan base, we wanted to extend Hiero Day beyond a one day event. This year we will have several events leading to Hiero Day during the Labor Day weekend to engage more with all the people who have supported Hiero Day over all of these years.”

The series of events will kick off dancing the night away FRIDAY AUGUST 30TH, at Silent Hiero – a silent disco featuring an array of DJ’s spinning the best of 90’s and today’s Hip-Hop and R&B.  Then on SATURDAY, AUGUST 31ST,  The Hiero Foundation Presents: Hiero Family Day in the Park, a free community event to be held at Defremery Park. It is open to all ages and will include a range of activities such as the Town Cup Skate Competition, a celebrity 3 on 3 basketball tournament, youth STEM activation, reading and literacy and some of Oakland’s best DJ’s. On SUNDAY, SEPTEMBER 1ST, the 45 Sessions DJ crew will get everyone in the proper mood to keep the hip-hop holiday weekend moving! Expect world class DJs and incredible town vibes in the heart of Oakland for the Hiero Day Party w/45 Sessions. Later that night, share a night of laughter with a mix of up-and-coming and nationally recognized talent like Slink Johnson (Adult Swim’s Black Jesus!) at the Hiero Comedy Circle.

Lastly, the weekend finishes off Labor Day MONDAY, SEPTEMBER 2ND with the 8th Annual Hiero Day, the official music block party celebrating life, music, and Oakland with thousands of your closest friends. Like previous years, it will be an all-day and open to all-ages, showcasing over 30 live performances on 3 stages taking place on 3rd and Martin Luther King Streets, just northwest of Jack London Square and a short walk from the 12th Street BART Station.

After the success of the Hiero Day’s first festival in 2012, former Oakland Mayor Jean Quan declared September 3rd as “Hiero Day” in the City of Oakland. Tajai Massey, a member of Hieroglyphics Imperium explained why Hiero Day is important for the community. “Hiero Day gives everyone who participates a chance to not only have a great time in a safe, welcoming atmosphere, it also gives us all a chance to meet, interact and show each other what we are all about.” 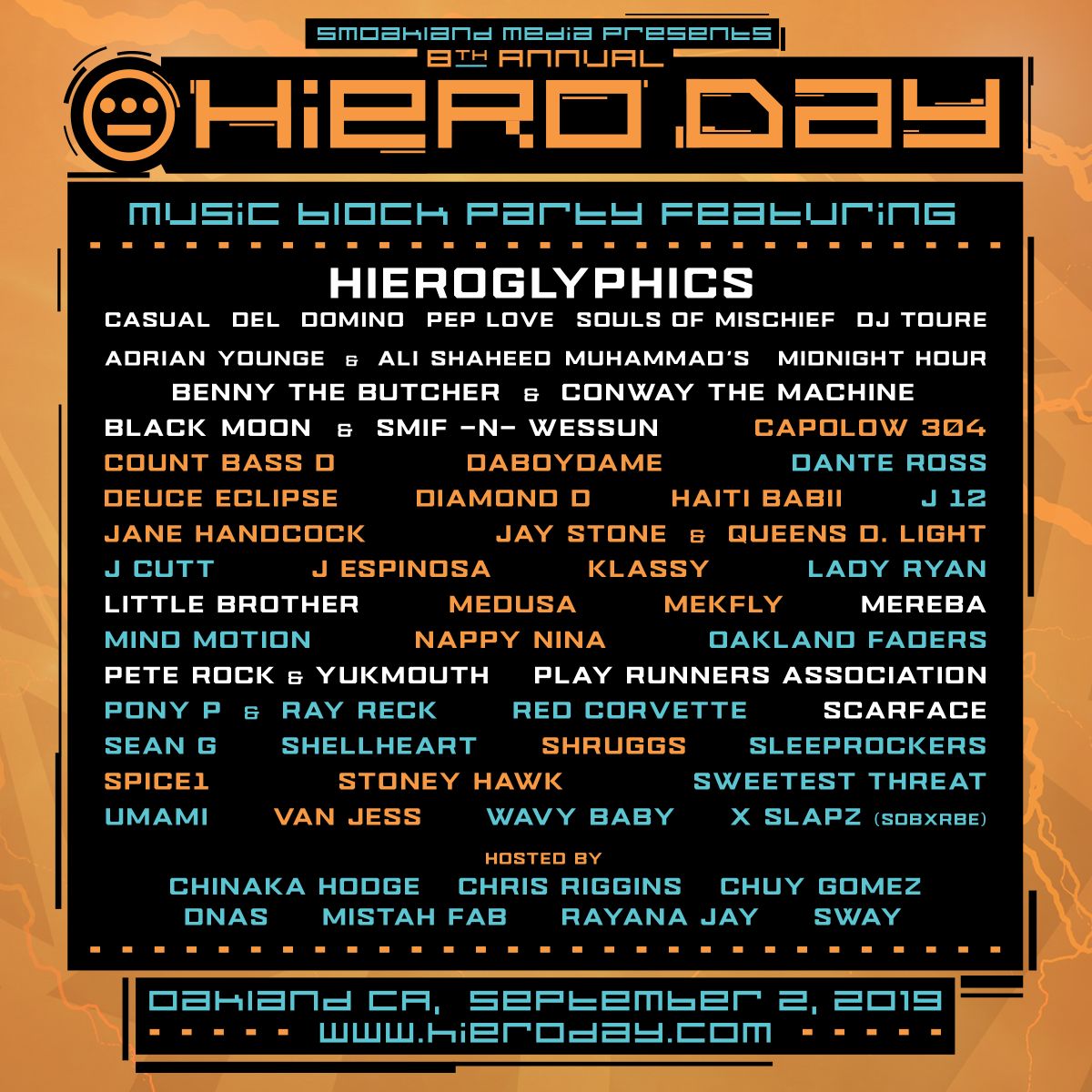 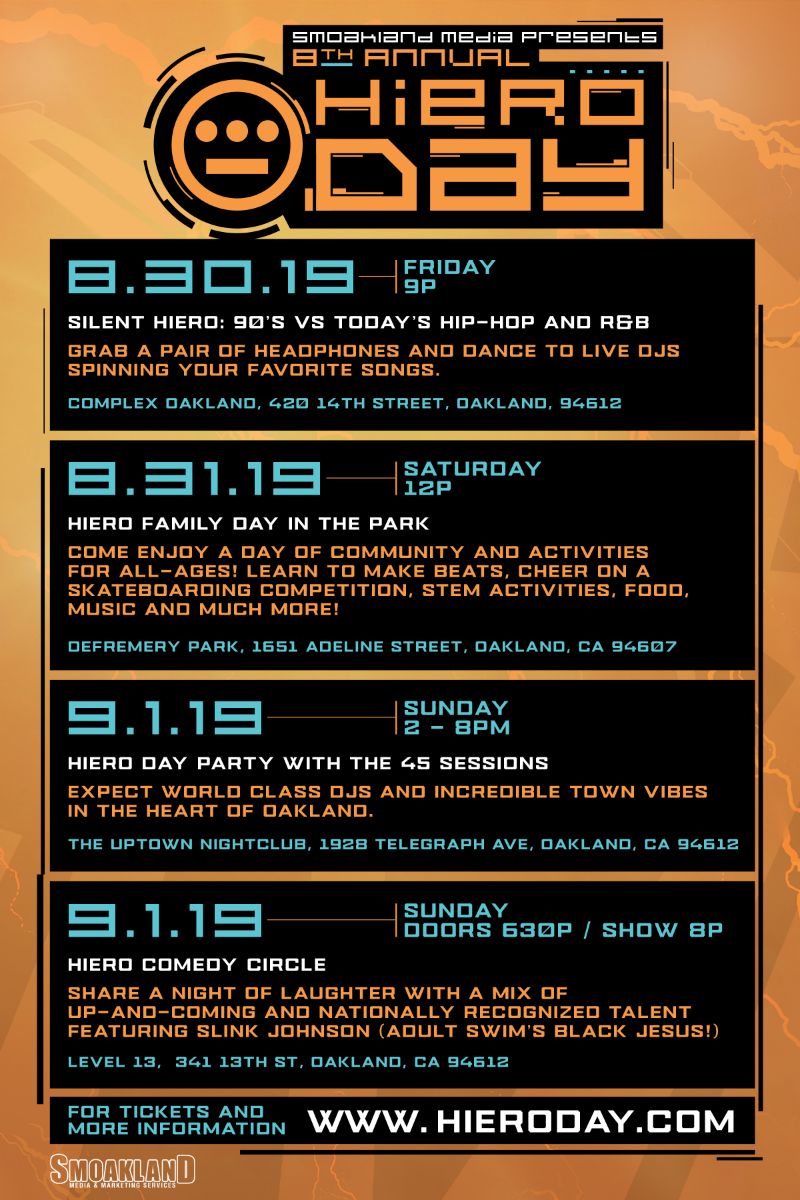 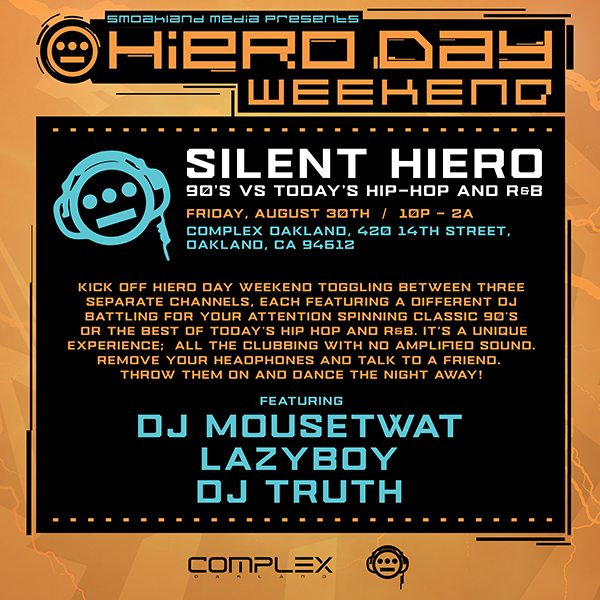 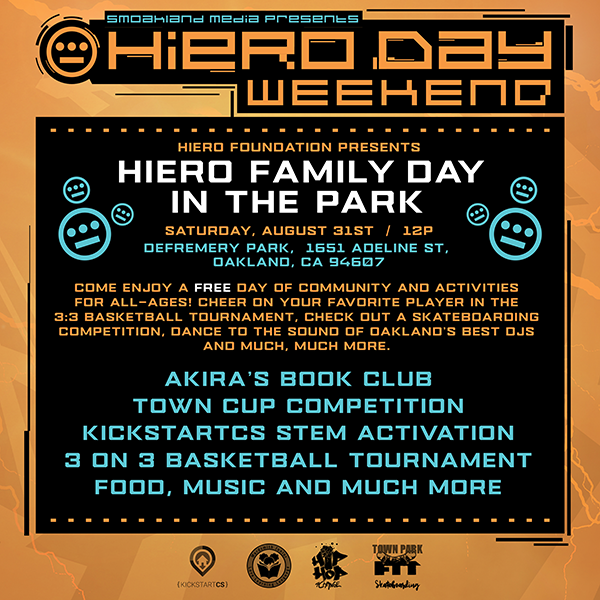 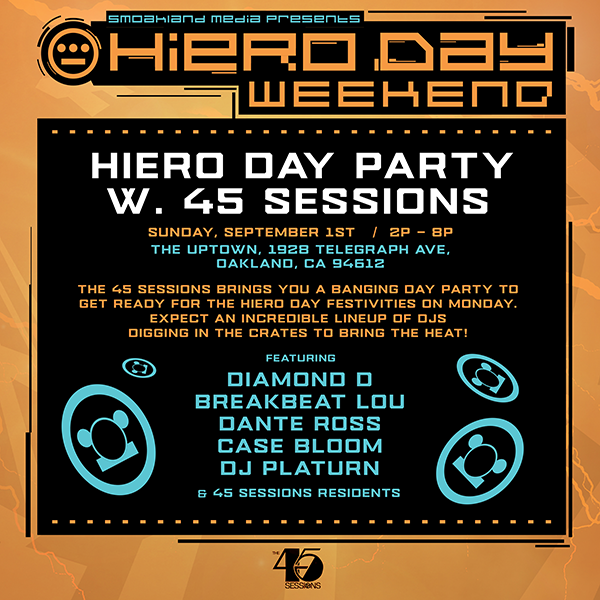 ABOUT HIEROGLYPHICS IMPERIUM
Hieroglyphics, an Oakland-based underground hip-hop collective founded in the early 1990’s, is composed of rappers Del the Funky Homosapien, Casual, Pep Love, Domino, DJ Touré, and Souls of Mischief members A-Plus, Phesto, Opio, and Tajai. After releasing several albums on major labels, in 1997 they created their own indie empire, Hieroglyphics Imperium, and have been an influential force in the independent music scene ever since. Since its inception, the Hiero Crew has thrived, releasing several albums and collaborating with a laundry list of mainstream and independent artists, including The Gorillaz, Q-Tip, Georgia Clinton, Jurassic 5, Bill Ortiz, Dilated Peoples, Dan The Automator, Prince Paul, Xzibit, and more.