The Wait is Over! Chance the Rapper Hops Into a “Hot Shower” ft MadeinTYP & DaBaby

Fresh off his latest appearance as both host and musical guest on Saturday Night Live, Chance the Rapper has shared the video for “Hot Shower.” Taken from his debut studio album, The Big Day, “Hot Shower” sees the Chicago rapper link up with MadeinTYO and DaBaby. For the Reel Goats-directed video, the three show off their goofy side. Jake Johnson and Kel Mitchell also make cameos.

The three hip-hop artists play host to several rowdy dance parties in a diner, a gymnasium, a race track and a courtroom. There’s also a loose plot that follows Chance’s scuzzy lawyer trying to borrow money from him, but that doesn’t have much to do with anything besides Chance’s inability to pick up the phone.

Watch the video for “Hot Shower” below, and check out the dates for Chance’s tour with Lil Yachty and Taylor Bennett below.

This past weekend, Chance the Rapper was the host and musical guest on Saturday Night Live, performing with Megan Thee Stallion and paying tribute to Chicago in his monologue. When it came to the hosting side of things, Chance clearly had a blast tapping into his love of comedy. Chance appeared in a bulk of the sketches throughout the night and reprised his “let’s do that hockey” sports reporter character Lazlo Holmes. It was the rapper’s third appearance on the show, following his stint as a musical guest in 2015 and his debut as host a year later. Rhythm + Flow, the Netflix hip-hop competition show on which Chance serves as a judge alongside Cardi B and T.I., just recently wrapped its first season. 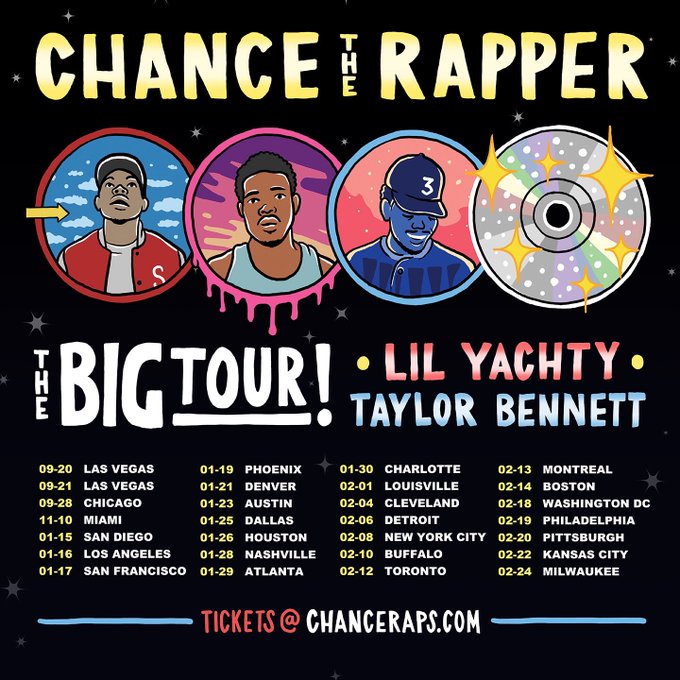