Bass-House artist DESTRUCTO is back with a new banger.  Out today, November 22 is “Twisted.” The track samples Mobb Deep’s “Got It Twisted” from their 2004 album Amerikaz Nightmare. Produced by The Alchemist, the song samples the 1980s Thomas Dolby hit “She Blinded Me with Science” which you can still hear elements of in this DESTRUCTO production.

2019 has been a busy year for DESTRUCTO. Between studio time and tour dates, DESTRUCTO (Gary Richards) has been helming major events on the U.S. festival front as the President of LiveStyle North America overseeing its properties Electric Zoo, Freaky Deaky, AMF Seattle and more. Most recently DESTRUCTO performed at ALL MY FRIENDS flagship event in downtown Los Angeles alongside JUSTICE, Black Coffee, Idris Elba, Diplo, MK and others.  His next major event lands in early 2020 with the music cruise Friendship. From January 6-10, he’ll host a wide variety of artists from Ty Dolla $ign and Channel Tres to GRIZ and TroyBoi. Log on to www.thefriendship.com for all details.

After Friendship, DESTRUCTO will embark on the ‘Twisted Tour’ in February and March taking him to major markets across the country including Chicago, Milwaukee, Boston, New York, Austin, LA and more. Tickets are on sale now. 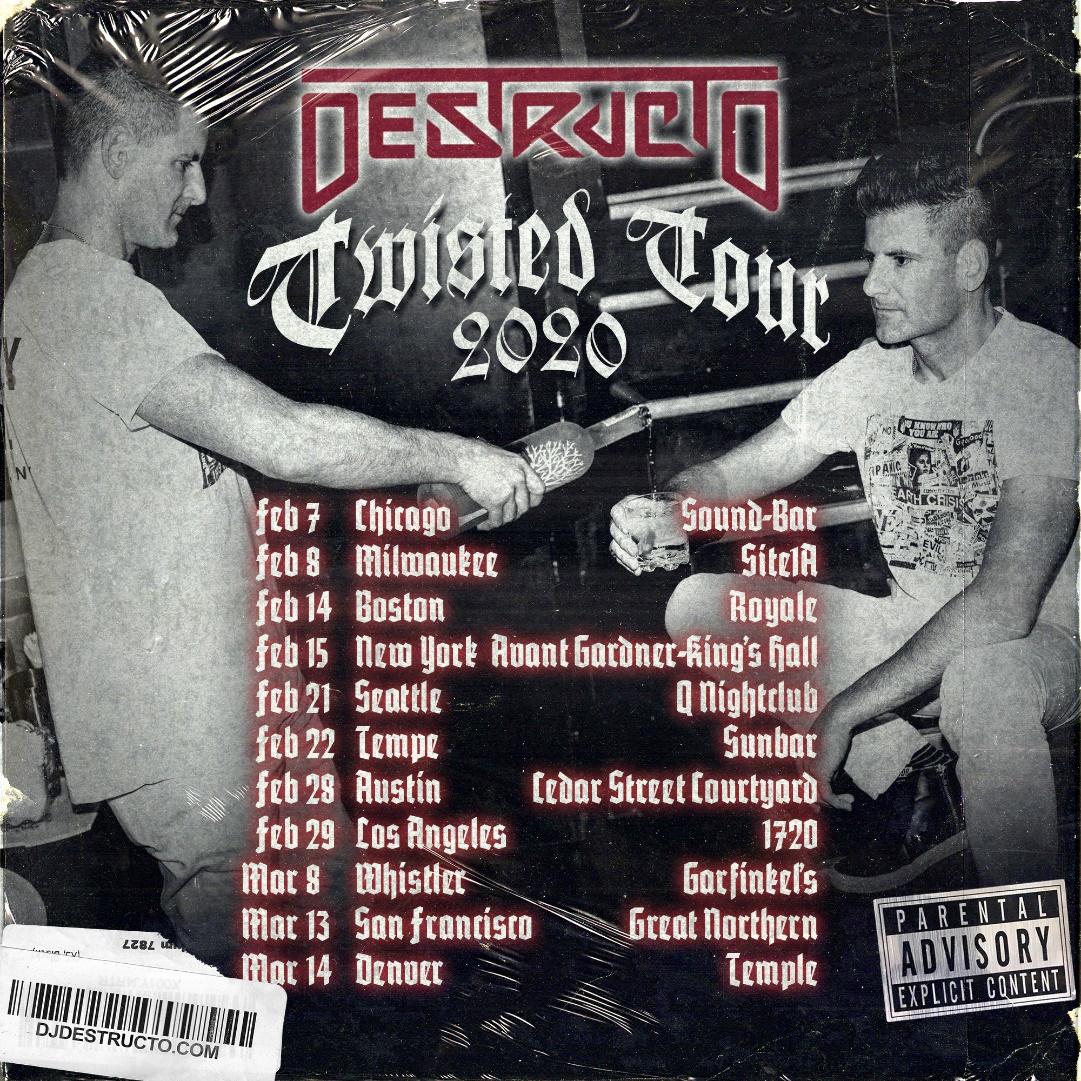 Since 2011, DESTRUCTO (Gary Richards) has dominated the dance floor on his own terms. He went from the acclaimed Technology EP (2012) and Higher EP (2013) to high profile remixes for artists as diverse as Depeche Mode, Giorgio Moroder, Major Lazer, Rob Zombie, Digitalism and more. 2014 saw the precision-guided producer in the realm of g-house (where rap melds with house music) introduce his singular solo style with the West Coast EP, boasting collaborations with YG, Ty Dolla $ign, Problem, Too $hort, Warren G and Kurupt.  Along the way, he’s touched down for shows everywhere from Australia and Fiji to Tokyo and Ibiza in addition to crisscrossing the country on alongside the likes of D.R.A.M., E-40, iLoveMakonnen, Anna Lunoe, Wax Motif, REZZ, Felix Da Housecat and more.  Released in early 2017, the RENEGADE EP featured collaborations with E-40 and Too $hort, Ty Dolla $ign & iLoveMakonnen, Pusha T & Starrah, Problem and Freddie Gibbs.  Latest releases “F*cking ShIt Up” featuring Busta Rhymes, “Boom” featuring Problem, “Bassface” (with new remixes by DJ Koos, Golf Clap and Dillon Nathaniel), “Loaded” featuring Yo Gotti and “Shots To the Dome” with Gerry Gonza are out now, with Chris Lake x DESTRUCTO’s “Y.O.D.O.” out on Lake’s Black Book label.

For more information on DESTRUCTO, visit: