Singer-songwriter Rikki Woodlin, professionally known as RIKKI, has been making a strong claim for herself as one of the entertainment Due to the quarantine, there’s been lots of new music being discovered recently. One great hit that has come out Music consumption and usage has shifted since the COVID-19 crisis began over two months ago. BMAT, the Barcelona-based music monitoring, Gravitas Recordings is proud to present Virtus In Sonus for its fifth installation. This series was revived after a near Imagine waking up every day to find you are living in a continuous loop - a day that repeats endlessly. Payment platform Klarna is known for its quirky sensibilities. When they came to outdoor/digital agency DASH TWO, looking for an eye-catching Dysphemic is back with a new album for the new decade. Following the Australian native’s ‘Mind Bandit’ EP from last year, Brontë Fall, the songwriting pen name of classically trained multi-instrumentalist Teri Bracken, embodies the spirit a centuries-old push by the The Virginia Beach born songstress has burst onto the scene as one of R&B's most notable new voices. She recently The return of the controversial Tekashi 6ix9ine didn't sit well with Toka. 6ix9ine's glorification of being a snitch on his UMC, the first and largest streaming service for Black TV and film from AMC Networks, is partnering with the American 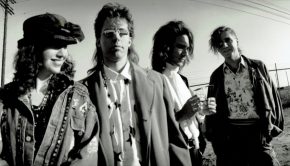 A supergroup which formed in the late 1980s, World Goes Round was comprised of 4 hot songwriters, singers and musicians: