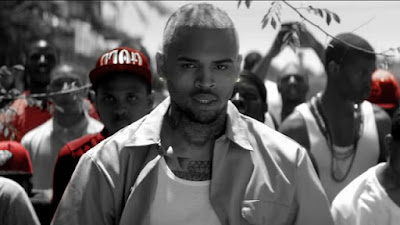 Calm down buddy (before you get yo ass whooped by a real gangsta).

*If the rumors are true, Chris Brown may have to appear in front a judge soon and explain why his name has been associated with a high-profile drug trafficking operation.


I know what you’re thinking, “white people sell drugs too”. You’re right, they do. But when a white guy is charged with a federal crime, he brings shame to only his family and friends. When a black guy violates the law, it becomes national news. Every time Chris Brown slips up, and that’s often, it reflects poorly on the rest of us—black males.

Instead of becoming the new king of pop, Brown morphed into the 21 century version of Bobby Brown, and he’s gotten progressively worse ever since. In fact, he’s a walking, talking, big ol bag of stereotypes. And worse, despite his privileged lifestyle, he’s still choosing to bathe in the dirt with Pookie and nem. That’s beyond stupid. Most cats do whatever they can to GET OUT of the hood, Chris Brown is confusingly doing the opposite and making a mockery of those who he’s desperately trying to emulate.

The people closest to Brown may argue that he was forced into a box at the start of his career. They may say that he originally was a packaged product of the music industry, and that his personal background is rough and gritty like the streets he refuses to walk away from. But even if that’s true, why is he allowing his past to merge with the present? He’s young enough to change his ways, and he’s talented enough to change the world. What’s stopping him?

Perhaps Brown chose this path to relieve himself from the pressure of living up to Michael Jackson’s formidable legacy. Being a troublemaker is easy, but only a handful of people have been able to put their thumbprint on music and pop culture. Chris Brown was supposed to be one of those people, and for a hot second, he was on his way. The music Gods were smiling on his young career, and then suddenly, he channeled the spirit of Ike Turner and roughed up everyone’s favorite Island princess. Making things worse, when he was forgiven by the public, it spawned a cycle of obnoxious and self-destructive behavior that has completely overshadowed his potential as an artist.

At 6’1, he’s an overgrown child masquerading as a “tough guy”. Here’s the problem: most brothas from the hood would tell you that assaulting a helpless female is the least “macho” thing a man can do. In prison, where most “tough guys” reside, anyone charged with domestic violence is likely to get his arse-whooped by the other inmates—it happens every day. This is why I don’t respect Brown’s “bad boy” persona— because it originated from a domestic violence situation. That incident should’ve opened everyone’s eyes to how much of a coward Brown is compared those who actually live in the hood. But in a world of second (third and fourth) chances, he’s been able to eff up, apologize, eff up again, apologize again, and eff up some more. Brown isn’t misunderstood or unfairly judged. He’s, simply, a glorified screw up who’s abusing the forgiving nature of his fans and society at large. To me, this fits the description of a brat, not a gangster.

Nevertheless, we’re all buying into the hype surrounding his manufactured “thuggery”. But seriously, what qualifies him to be a thug? Perhaps it’s the numerous tattoos splayed across his body (even though corny ass Nick Cannon has a bunch of those). Maybe it’s because a few years ago he got into a dust-up with Drake (the corny Canadian-born rapper who’s more popular for singing love ballads than actually rapping). Maybe Brown’s a tough guy because he likes to piss off his neighbors by throwing house parties that last well into the night (something that Justin Bieber does on a regular). No, wait, I got it: Brown’s new image is based on the copious amount of cocaine and marijuana floating in his system (because snorting lines will make anyone feel invincible).

Maybe he’s a “thug” now because he claims to be from the infamous “blood gang”. Yeah, that’s it. The high-yellow, break-dancing, bubblegum spokesman isn’t pretending to be “hard”. He’s not faking the funk like so many other young wannabes do these days. Nope, Brown is the real deal—he’s a grade A, certified hood n*gga. Let’s give him a round of applause.

But here’s the irony behind his transformation: most people who live in the hood would trade places with him in a second. For these individuals, slinging dope is a means of survival, gang banging is a means of protection, and breaking the law is a casualty of circumstance. You can ask the most hardened criminals—if there was a better way, they’d take it. And here comes Chris Brown, the multi-millionaire who would rather roam the streets than play in his ivory tower. Must be nice.