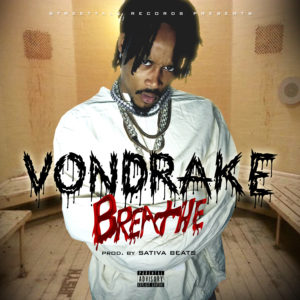 Baton Rouge has brought forth an influential rapper that the world needs to hear, and his name is VonDrake. The artist has been steadily rapping since he was a child, going all the way back to five years old. What made him want to pursue a career in music is partially due to his older brother. After VonDrake would hang around his brother and his friends, he was instantly drawn to everything that music represented. And for VonDrake, music was a therapeutic art form. Whatever he was going through, no matter the magnitude, he fell in love with the way music could be his outlet.

This form of cathartic release can be heard through his latest single, “Breathe”. “’Breathe’ is a term of release. I have been working hard, and dealing with messed up people to get where I want to go,” said VonDrake. The single demonstrates his artistic ability to take a lot of avenues within the song. It represents how it is finally time for VonDrake to spread his wings and let loose.

Over the years, the artist has overcome obstacles in which he has been deceived and misled. “My motivation is from the love I receive. When someone tells me they relate to me, it means a lot to me,” said VonDrake. “There is no better feeling when someone is touched by my music.” What differentiates him from other artists is the type of person he is. He’s never trying to follow a trend, or be someone that he isn’t, and this comes out in his music.

Pursuing more music and film opportunities are up next for VonDrake. He also has a clothing line in the works, which will debut a year or two from now. Anything he puts his mind, or voice, to showcases his true versatility. VonDrake successfully touches on different bases so he can speak to any crowd. He’s always generating feedback from the masses in order to know what to speak about. In fact, he has a message for his fans: “Let me know what you want to hear, and I’ll deliver it to you.”

Make sure to follow VonDrake on his social media sites below, so you don’t miss
out on the release of his upcoming music projects!
https://www.instagram.com/vondrake_str4/
https://www.facebook.com/VonDrake.Guilory
https://twitter.com/VonDrake10
Snapchat: vonordrak
“Breathe” Music Video