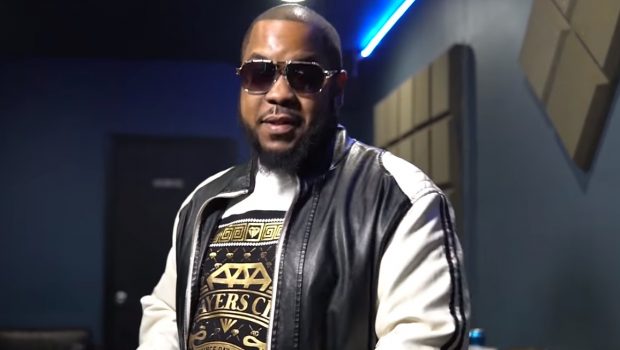 The Man Behind Joyner Lucas’ “Will” Beat: Crank Lucas

Crank Lucas is now verified in more ways than one!

Despite 2020’s turbulent start, Rapducer, Crank Lucas is off to an amazing start of the year. He recently received his verification check on Instagram. A goal he had been trying to conquer for quite some time. And he also received his first placement. This isn’t just any placement, he produced possibly the best joint of the year so far, Joyner Lucas’ “Will.” “Will” is an impromptu tribute to rapper/actor/director, Will Smith. Not a bad way to get your foot in the door as a producer. The self-proclaimed Rapducer (combination of rapper and producer) didn’t stop there. He just dropped his new mixtape, “I Just Love Murdering Beats,” where Crank spits over some popular beats. Crank still uses his YouTube skits as a way to promote his beats and this time, it paid off in a major way. It was enough to grab the attention of, Joyner Lucas and land his beat a spot on the “ADHD” album.

During our conversation, Crank details how he secured a spot on Joyner’s album, his recent success and much more!

Man, it all seems to be coming together for you. You got the Instagram verification and you just got your first placement on Joyner Lucas’ masterpiece, “Will.” Things are going well.

Crank Lucas: Oh yeah! Man, everything has been blessed. Last time we spoke, that definitely helped me out as far as my brand and everything. I finally got that last infinity stone, which is that IG verification checkmark. The business been going real good. I got a placement with Joyner Lucas as you mentioned. My first placement is a hit. We’re going to see what happens with it statistically as far as the billboard’s and all that go, but people are taking more and more notice.

What’s the process of getting verified on Instagram because we actually spoke about that off record?

Crank Lucas: You got people that offer services and you pay all this money to do it. I’ve always believed in doing stuff organically. So, you go in your settings and you ask to request a verification badge. They want your I.D. and all that. I’ve been trying to get verified for years. The biggest difference was, this particular time when I tried to do it, I put in my bio that I had been featured on MTV, All Def Digital, TMZ, Hip Hop DX, The Hype Magazine, all these different outlets. They are looking for press and it’s not like you can send that press to them. But I did that on a Sunday, and Monday I had the verification.

So, Joyner Lucas comes out with this amazing tribute to Will Smith titled, “Will.” How did it work? Did you reach out and tell them you had this dope beat or did he hit you up and ask for a beat because he had this dope song?

Crank Lucas: Basically, what happened was, he heard the beat and he was like, “Did you produce this?” I was like, “Yeah! Why do you want it?” He was like, “Yeah! I need it for the album, “ADHD!” That’s how that came together. We talked about this last time, that was what my whole formula was for even making the skits in the first place. Typically, industry artists don’t associate with internet producers, but you have a few that do break through that barrier and get on. I just happened to do it using the comedy and everything to do it, so the plan worked.

Did you have a relationship with, Joyner prior to this?

Crank Lucas: He just messaged me. I woke up, it was the day before my birthday, I looked on there, I saw a message from, Joyner Lucas, verified account. I’m like, “Oh shit… okay.”

Crank Lucas: I sent him the beat and after I sent him the beat, I was hitting him up periodically just seeing if he was looking for other tracks. He was like, “I’m still writing to the joint you sent me.” So, I knew he was taking his time and writing to it. And you know, this happens, you meet somebody, and they say they want a beat or whatever and they might not pick it. It might not make the album. I don’t even know, I’m like, we’ll see what happens. I don’t know that he’s writing a tribute song for Will Smith. The only thing that I knew, once I signed the contract, I knew the song was called, “Will.” I can’t even remember now what happened Wednesday how I first discovered that he had a video to it. I seen the video and was like, “Yo, this is what he did with the shit? Oh shit! Alright bet.” Because I knew the album was coming on Friday. I was already ready and prepared to put that out there. But to see the video, it was crazy. That shit was major. I knew that because of the platform that he has and the amount of fans that he has, it was a likely chance that it might reach Will Smith’s ears. And then he turns around and repost it. Then all these other celebrities started posting it. LeBron James posted it last night. It’s beautiful.

But I fuck with Joyner Lucas as an artist. I love what he does. I love his lane and his bravery and his creativity. I really like what he did with the song saluting who I believe… if you’re in any type of entertainment field or any type of entrepreneurial business and you’re under the age of maybe 55. And I only say 55 because at that age, you probably didn’t watch Will Smith the way that our generation did. But if you’re around that age range and in that group, you have to look at Will Smith as somewhat of an idol. To go from where he started from. He was a one-hit wonder. His second album flopped before he went on to do the “Fresh Prince.” Just to see him where he started with acting. His acting was real cringy in the beginning. He got better and better at it and became a big-time action movie star and still got bars. I think that it’s dope that Joyner did that. That somebody did that period.

Your beat could be on the biggest hit of the year. Does it feel like you expected it to feel or is it still surreal to you right now?

Crank Lucas: Man… it’s crazy because it’s like, we’re still dealing with what we’re dealing with right now. It’s crazy because the last time we talked was the day Kobe [Bryant] died and now this is all happening in the middle of this Corona Virus. So, you enjoy it, but at the same time we’re dealing with this. It’s definitely been motivating though. I’ve been doing a lot of great things for a lot of years, so, I’m to the point now to where when I reach these successes, I do take my time to celebrate them, but I also want to make sure I’m staying focus and thinking forward to the next move and the next thing I gotta do. What’s the next issue to tackle? I’m loving it though. The ladies hitting me up, so…

You can’t predict what people do with your beats. Obviously, it’s a business and you have to provide beats for people who want to purchase them. But at the same time, you don’t want to hear something whack over one of your beats. But to have “Will” on one of your beats, that has to be satisfying in itself.

Crank Lucas: Ah man, that’s the crazy thing. That’s the nature of being a producer. People think like… “Why would you sell them a beat. They are whack.” Listen, this is business. In this business, the point is to make money. And it’s not just rap music. There’s plenty of producers and song writers who sold their music to an artist and they might not have liked the way the song came out, but they eating off of it. For it to be an artist like, Joyner Lucas and him to do what he did with it is only right from my perspective. As me being a producer and the type of music that I make, it’s almost the perfect combination. And it’s supposed to be like that. And then to add on top of it getting as much as attention as it is because of who it’s about and all that, that’s even sweeter.

“I Just Love Murdering Beats,” is your new project. You are rippin some of the tightest beats out right now. Which was your favorite beat to rap to?

Crank Lucas: Probably “Palmolive.” That Freddie Gibbs joint. That beat is disgusting. When I first heard it, I was like, “Oh my God.” I listen to the song and the sample periodically just to get in those vibes. So, I definitely like that and what I did with it. That definitely stands out to me.

How did this project come about?

Crank Lucas: This project came about because I had all these songs and I had did these joints and put them out as skits. I felt like people needed a collection that they could see at one time. Every time something happens, now you have new fans that haven’t been introduced to your old stuff, so I’m reintroducing stuff now. The Instagram verification and having the attention from that platform is growing, so I have to keep something in their ear. So, I’m reintroducing older stuff. So, I had all of these songs and I was like, “Let me just go ahead and put this out while I’m working on my new music, so they know the boy is serious.

I like the fact that it never feels like your workload falls off. You seem to always be grinding.

Crank Lucas: Yeah definitely! We’re in an era now where the attention span is so low, and we’re overloaded with content. In the midst of it all, I still have my old school values of staying relevant. I try not to over saturate. I’m feeding the streets. Especially now, everybody need to be fed because they need something to take their mind off of stuff. So, I was like, “Alright, let me give ya’ll this poison real quick.”

I’m happy for your success and I’m glad things are starting to pop off. Give me something in closing, my man.