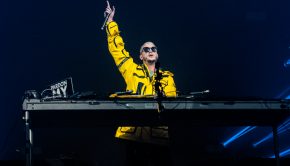 DJ Snake Sells Out the Shrine in LA

DJ Snake took over the Shrine Auditorium & Expo Hall in Los Angeles on Halloween night of 2018. Thousands of Best known for “24 Hours” and “This D”, TeeFlii takes fans through a day in the life in the Real